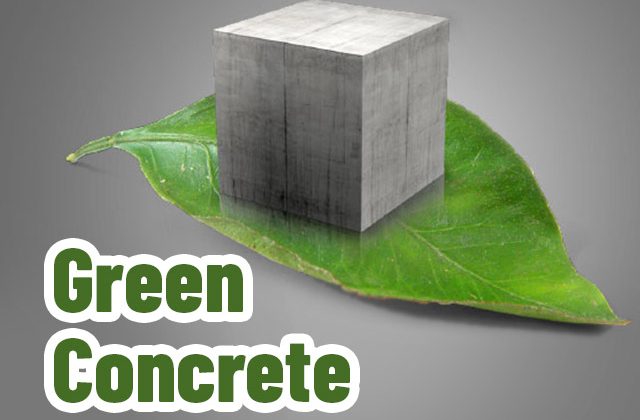 Eight to 10 percent of the world’s total CO2 emissions come from manufacturing cement. The global warming gas is released when limestone and clays are crushed and heated to high temperatures. Green concrete is defined as concrete that uses waste material as at least one of its components, or its production process does not lead to environmental destruction, or it has high performance and life cycle sustainability.

Various efforts have been conducted by researchers to arrive at some alternatives that are able to significantly reduce high energy consumed and environmental impacts during the fabrication process of cement, including implementing the concept of industrial ecology and green chemistry as well as nanoengineering that study the behavior of the structure and organization of nanoparticles of cement in the mix for achieving higher performance.

The cleaner technologies in concrete production, such as substituting relatively high percentage of cement with fly ash (up to 100%), the use of other natural pozzolans, development of concrete with recycling or waste materials, and developing nano concrete by integrating CNT’s or self-sensing CNT’s in the concrete mix for higher performance in terms of strength, stiffness, and durability, have been developed and are addressed in this article.

Several efforts that have been done so far in implementing the concept of green concrete and material development of nano-silica in Indonesia are discussed. Finally, problems in the realization of and potential barriers to green concrete as well as political scenarios that have been adopted by several countries through the implementation of various priorities and deregulation in various fields are also discussed.